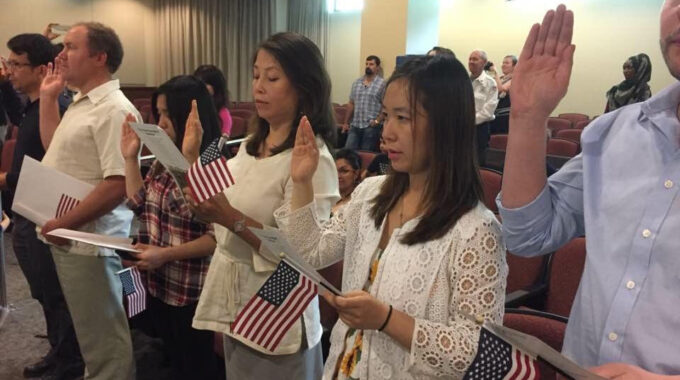 Joana and Lucy becoming US Citizens.

After a long citizenship application process, Joana and her daughter Lucy opened their mail and discovered the notice that their citizenship exam had been scheduled. Set for August 7th, they only had a few short weeks to get ready. They immediately contacted Whatcom Literacy Council to ask if a tutor might be available to help them study for their citizenship exam.

Joana and Lucy were connected with their tutor Amanda and they began their crash course in U.S. history, government, geography, customs, and culture. In just twelve and a half hours, they covered facts about the branches of government, American places, people and much more.

Lucy, in her thank you note, thanked the Whatcom Literacy Council for introducing them to their tutor Amanda and the help they received, adding that, “Amanda was really kind, patient and helpful.”

On August 7, 2017, Lucy and her mother, had their interview, passed their exam and became U.S. citizens!

On Tuesday, August 21st the Whatcom Literacy Council was the lucky recipient of the proceeds…